The Quest of Quessenberry 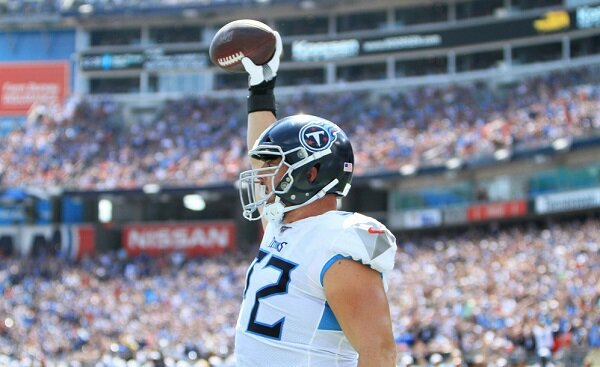 A Titan’s Journey From Cancer to Big-Man Touchdown

Every now and then, we’ll see a coach conjure up some trickery by giving the football to the guys who, frankly, never get the football. And the celebrations are one of a kind.

David Quessenbery is an offensive lineman for the Tennessee Titans, and what he did on Sunday marked the completion of a remarkable underdog quest.

Quessenbery grew up in Carlsbad, California before playing football at San Jose State University. He only played two seasons of college football due to injury before entering the NFL Draft.

The Houston Texans selected him in the sixth round in 2013, but he missed his entire rookie season with a foot injury that kept him on injured reserve.

In 2014, Quessenbery was diagnosed with cancer, and he stepped away from football to fight a new battle for nearly three years.

In 2017, Quessenbery was cancer-free, and the Texans re-signed him to the practice squad. He was elevated to the 53-man active roster for the team’s final two games, but he hardly saw the field.

From there, he joined the Titans practice squad in 2018. And this year, he made the 53-man roster to start the season for the first time in his career.

On Sunday, the Titans had a 1st-and-Goal from the 1-yard line to start the second quarter, and Quessenbery checked in as an eligible receiver. He slipped past the defense on a play-action pass and found himself wide open in the back of the end zone… touchdown.

After playing just 28 games (24 College, 4 NFL) in more than 11 years, including six missed seasons, David Quessenbery hoisted the football like the Lombardi Trophy; a celebratory moment for a Titan, a cancer survivor, and an underdog. Quest complete.