The Voice of Vitale 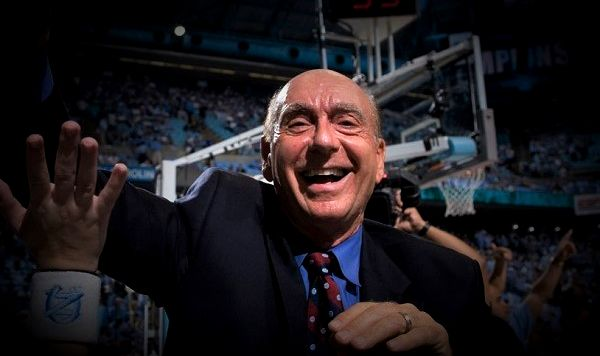 A “PTPer” is a primetime player. A “Diaper Dandy” is an outstanding freshman. And, “It’s Awesome, Baby!” can make any game feel like a title fight.

I learned these phrases when I was maybe six or seven years old. The hyperactive hysteria in this man’s voice made watching routine basketball plays feel like winning lottery tickets. You don’t forget that voice, and you definitely don’t forget Dick Vitale.

One of ESPN’s marquee broadcasters has echoed across college basketball for almost half a century, and the raspy pipes of this unexpected man are the sounds of a lifetime of memories for more than just me.

Born in North Jersey, Vitale’s parents didn’t have much, but they had joy. He played his way onto the roster at Seton Hall before a short-and-sweet coaching career at Detroit in the 70s. Vitale was a successful college player with a decent coaching resume, but his ability to incite over-the-top passion with his words is Hall of Fame.

In 1979, Vitale signed on to call college basketball games for a new 24-hour sports news network. It was ESPN’s first year in existence, and Vitale was the voice of the first NCAA basketball game the network ever aired. There are many voices synonymous with moments in sports history, but Dick Vitale and college basketball are linked for eternity.

His lengthy and iconic career in sports broadcasting led to last night’s honor in New York; the Lifetime Achievement Award in Sports.

Vitale was 40 years old when he called that first game for ESPN. He’ll turn 80 this summer, and he’ll still find a way to strap on a headsett, utter ridiculous expressions, and deliver audible nostalgia to millions this coming season.

“I’m living the American dream. I learned from my mom and dad, who didn’t have a formal education, but they had doctorates of love. They told me that if you gave 110 percent all the time, a lot of beautiful things will happen. I may not always be right, but no one can ever accuse me of not having a genuine love and passion for whatever I do.”

On April 6, 2015, I heard that voice in person for the first time. It was halftime of the National Championship Game with Duke and Wisconsin tied at 31 apiece. I left my courtside seat for a snack break in the media room, and so had Dick Vitale.

After constant commentary for a half of basketball, the man earned a 90-second commercial break, and he spent much of it talking to me about Grayson Allen’s breakout performance. Eventually, he looked down at his watch and realized he was out of time. That’s when it happened. He shook my hand, started power-walking toward the court, and said it…

A lifetime achievement for unrivaled joy of the game. Thanks, Dickie-V. Awesome indeed.