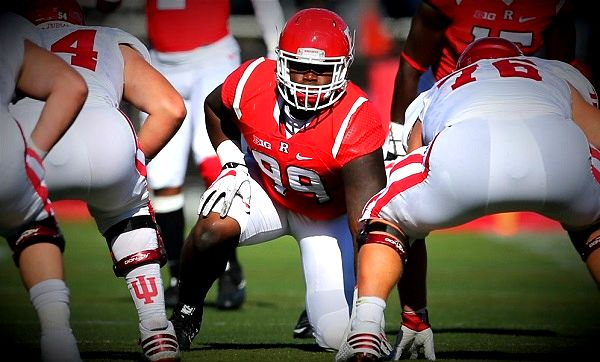 With Thursday’s NFL Draft looming, hundreds of underdog stories will be unearthed this week. Many of them will involve players you might not know. The sweet redemption of childhood struggle to professional athlete comes full circle when the phone rings on draft night. Not only is a six or seven-figure salary waiting, but a lifelong dream comes true for so many athletes.

Today’s feature is likely a name you’ve never heard; Kevin Wilkins. If you remember Michael Oher’s story in the movie The Blind Side, you’ll catch some similarities.

The redshirt senior from Rutgers is approaching 25 years old, and he’s one of the oldest prospects in this year’s draft. He won’t go in the first round, the first day, or maybe at all. But his story will have thousands rooting for a third-day selection card that reads his name. Here’s why:

When he was six years old – just old enough to remember the day – child services came into his mother Della’s home in New Jersey. They took Kevin and his three siblings because of his mother’s drug addiction.

“They took us to the car, and we drove away. I cried so much I threw up in the back seat.”

The four children were separated, and Kevin spent multiple years running through foster homes like they were pass-blockers. As a teenager at his 14th group home, he joined a training program led by John and Kathleen Wilkins. After months of inviting Kevin over on the weekends, the Wilkins officially adopted him.

With a new family, new siblings, and the hardest years of his life behind him, Kevin entered high school with more depth and maturity than you could ever imagine in a 16-year-old kid. That maturity makes him a standout among low-round picks. It was that first year of high school when he finally saw his biological mother again, almost ten years later. She was receiving help in rehab, and his siblings made sure she stuck with it.

Then came football. In four years of high school on the gridiron, Kevin won – get this – four state championships. He was an offensive lineman at Don Bosco Prep for two state titles before transferring to St. Joseph for two more as a junior and senior.

At 6-foot-3, 300 pounds, and quick-footed in the trenches, Wilkins had multiple scholarship offers, but he chose Rutgers to stay near family… both families.

After five years as a defensive tackle with the Scarlet Knights, Kevin’s moms are now close friends. They live just a few miles apart in New Jersey, and they’ll be together this weekend as their son awaits the phone call that will change his life. It may take a while before Kevin finds his new home, but he’s well-prepared for the waiting game, and he knows it will all work out as it did before.

[We’ll have more NFL Draft prospect Underdogs the rest of this week.]