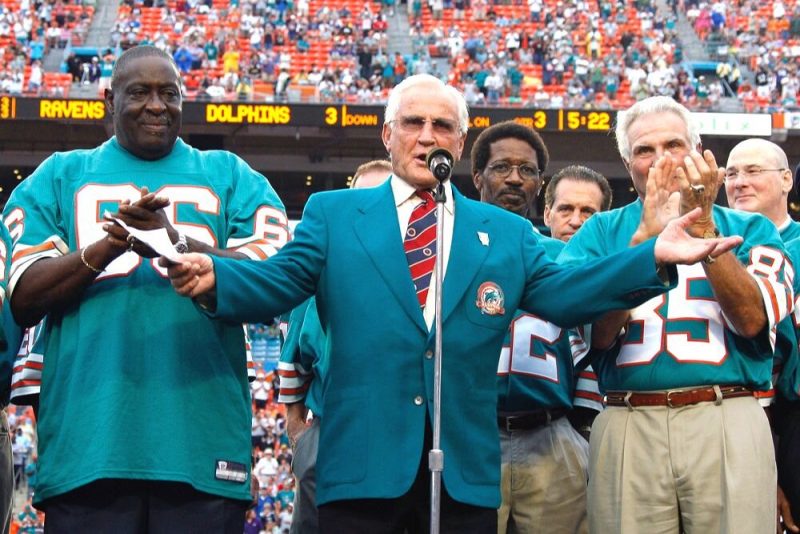 He was the winningest coach in NFL history with 347 victories. His 1972 Dolphins had the only undefeated season the NFL has ever witnessed (17-0). After 33 years of coaching greatness, and a lifetime of impact on the game of football, Miami head coach Don Shula has passed away.

Before Shula became the standard of excellence for three decades in the NFL, his early days had a story to tell. Today, his bust sits in Canton’s Pro Football Hall of Fame less than 50 miles from where he grew up in Northeast Ohio. But it took more than 50 years of hard work to get there.

As a kid, Shula’s mother prohibited him from playing football after he received a cut on his face in a neighborhood football game. He was 11 years old, but Mrs. Shula couldn’t stop one of the great ones from chasing his dream. A few years later, the football coach at Harvey High School asked Don to play, so he forged his parents’ signatures to join the team without them knowing.

Shula played running back and led Harvey to its first seven-win season in 18 years, earning himself a scholarship at John Carroll University. Despite dashing his way to John Carroll rushing records, Shula ended up as a teacher in Canton in 1951. But the football gods had other plans…. Ones that would lead him back there 56 years later.

The Cleveland Browns selected him in the ninth round of the draft, and he transitioned to defensive back for seven years with Cleveland, Baltimore, and Washington — all with winning records. All Don ever did was win. Five years after retiring from football, he was named the head coach of the Baltimore Colts (1963) before taking the reigns of the Dolphins in 1970. The rest, as they say, is history.

In Miami, Shula took over an expansion franchise. The Dolphins were abysmal, but he found a way to use teamwork and leadership to extract production from less talented players. Today, the Dolphins are one of the NFL’s most iconic brands thanks to 26 years of Shula’s success.

He took them to the playoffs in his first two seasons. And in 1972, he made football history.

The 1972 Miami Dolphins are still the only team in NFL history to complete the perfect season; 17-0. Led by QB Bob Griese and RB Larry Csonka in the backfield, Miami ran the table in the regular season before defeating the Browns, Steelers, and Redskins in the playoffs, all by a touchdown or less.

What made the ’72 Dolphins even more impressive was the names of the players on defense. Nicknamed the “No-Name Defense,” that collection of unheralded defensive players may serve as Shula’s lasting legacy — a coach who could do a lot with a little.

As Bum Phillips once said, “Don Shula can take his and beat yours, and he could take yours and beat his.”

“Coach Shula — you will truly be missed! You embody the definition of ‘greatness.’ You brought that winning attitude with you every day and made everyone around you better.” — Dan Marino

“If there was a Mt. Rushmore for the NFL, Don Shula certainly would be chiseled into the granite.” — Dolphins Chairman Stephen Ross

A teenager forged his parents’ signature to play football and changed the game forever. Dolphin Don, the NFL’s winningest coach, and an underdog, gone at age 90.