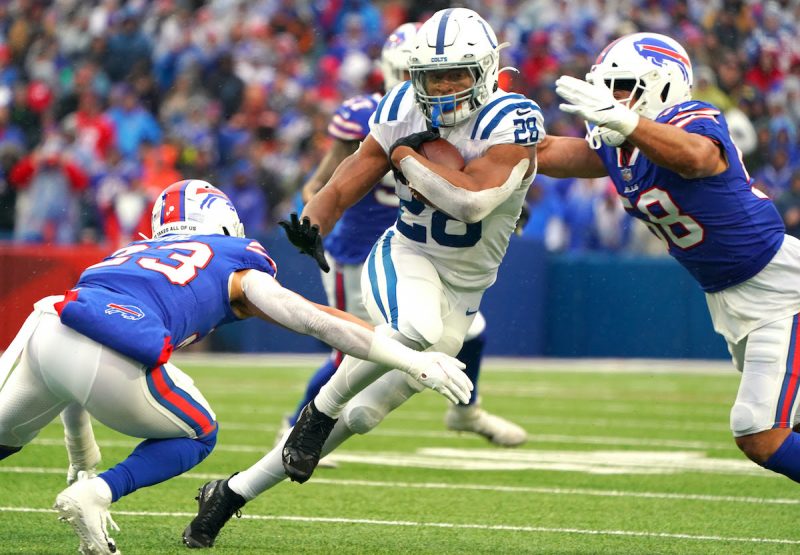 The NFL season rolled into Week 11 with no shortage of surprise games, from Indy’s rout of Buffalo to a huge upset in Tennessee. The Cardinals (9-2) are the first team to nine wins while the Packers (8-3) and Titans (8-3) both lost on Sunday. We’ve got seven of the top storylines from Sunday’s games, and we’ll cap off Week 11 with a Monday Nighter between the Bucs and Giants.

JT’s 5 House Calls: The Colts capsized the Bills (41-15) in Sunday’s early slate thanks to a franchise day for RB Jonathan Taylor. JT racked up 204 total yards on 35 touches with a whopping 5 TDs (4 rushing, 1 receiving). Indy has now won three straight.

A Texas-Sized Upset: The stunner of the day came in Tennessee where the one-win Texans took down the Titans (22-13). The AFC’s worst team beat the AFC’s best team behind QB Tyrod Taylor’s two rushing TDs.

Wild Ending in the North: Aaron Rodgers (4 TDs) and Kirk Cousins (3 TDs) led a high-flying air-raid with 7 TDs and more than 700 yards combined in the Vikings-Packers battle before a wild finish. Minnesota kicker Greg Joseph won it with a field goal at the buzzer (34-31).

Eagles Fly With Ground Game: Philly won its second straight game with a ferocious rushing attack that sems to be picking up steam. The birds had 242 yards on 50 carries among four rushers, including 3 TDs from QB Jalen Hurts. They beat the Saints (40-29).

The Rivera-Newton Reunion: The Panthers host Washington in a matchup between Cam Newton and his former head coach, Ron Rivera. Newton struck first, but Rivera got the last laugh (27-21).

Chiefs Chop Cowboys: One of Sunday’s most notable matchups expected high scoring between the Chiefs and Cowboys, but it wasn’t so. Kansas City won a defensive struggle (19-9) where neither Dak Prescott or Patrick Mahomes threw a touchdown.

NFL: Week 11: What We Learned From Sunday’s Games