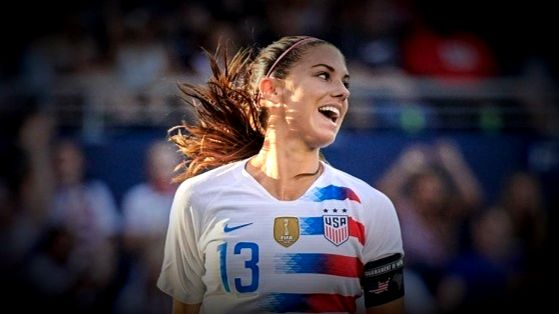 Alex Morgan & The USWNT Are Fighting For More Than A Cup

In three weeks, the U.S. Women’s National Team will embark on another World Cup quest. This time, with France as the setting, Alex Morgan and a crew of bonafide superstars will attempt to conquer 23 other nations and deliver the United States its fourth global crown in 28 years. However, this summer is about much more than just soccer.

On March 8, the USWNT filed a lawsuit against the United States Soccer Federation for gender discrimination and unequal pay. In some cases, the women’s players earn 38 percent of what the men’s national team players earn per game, and we don’t even have time to discuss travel amenities, schedules, and much more.

If you’re slow to jump to conclusions before doing your homework, you might have questions regarding comparisons in the areas of jersey sales, ticket prices, viewership, or game schedules. You might also be pumping your fist and yelling “You go girls!” while reading this. All in all, the women’s national team has a really good case, but it starts and ends with winning, and they’ve done a lot of that.

The Underdog doesn’t exist to take sides on hot-button issues, but rather praise the story behind an Underdog’s fight. And this fight? It’s… massive.

You can debate the economics one way or another (I’m sure plenty of you will reply to tell me what you think, and I welcome that feedback), but you can’t debate the level of success on the pitch. With four Olympic gold medals, three World Cups, and seven of the top 14 (50 percent!) international goal scorers in the history of women’s soccer, the USWNT is a global superpower in sports.

There are many stories within this story – 23 names on the roster and millions of female athletes – but the face of this particular fight is Alex Morgan. The USA forward recently cracked the century mark (100 goals) in international competition, and she’s a generational hero to young soccer players.

Now, Morgan and her 22 foot-soldiers travel to France hopeful for so many goals, yet one simple one: Win a fourth World Cup, and win over the world for female athletes everywhere.

The Players’ Tribune: The Note (By Alex Morgan)